Over the years our Simulation Centre had quite the challenge of ensuring that our otscope/opthalmascope handles had enough power to endure a busy week of ear/eye skills lab. Often times batteries would fail to endure a 3 hour skills session. This would draw the ire of faculty and students alike. We could have chosen to purchase more batteries or handles but we felt that having users switch battery or handle partway through their lab would be a bit of a hassle. So in the summer of 2017 I went on a quest to look for a solution. How difficult could it be!

The current battery technology used by Welch Allyn for their handles is of bygone years. Nickel Cadmium batteries haven’t been used widely in portable electronics for a couple of decades. Lithium Ion batteries are now King. The wide use of Li-Ion over the years has seen the price come down considerably. Li-Ion batteries can be found in the Tesla, portable computers and many cordless power tools. Li-Ion batteries are cheaper, have a greater energy capacity and it has up to 5 times the lifespan of NiCd. Surely there must be a Li-Ion replacement for the 72300. 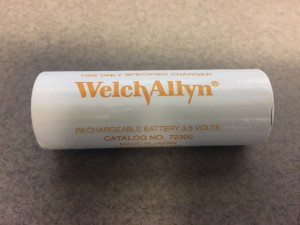 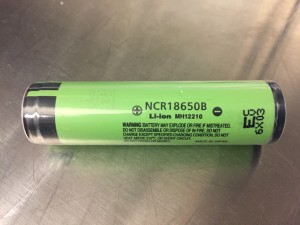 Replacing the 72300 is not that easy. Substituting one battery technology for another is not as simple as finding an equivalent battery size and plugging it in. For one, NiCd batteries have a nominal rating of 1.2 volts per cell where as Li-Ion have a nominal voltage of 3.6 volts per cell and typically max out at 4.2 volts, which is well over three times the voltage of the NiCd cell. Considering the 72300 has a voltage rating of 3.5 volts, which is almost 3x that of a NiCd cell, it would appear that the 72300 is a custom cell created by Welch Allyn, composed of three cells stacked one on top of the other in series and packaged in a cylinder resembling a elongated d-cell. With only a 0.1 volt difference between the 3.6 v, single cell Li-Ion battery and the 72300 NiCd, finding a replacement was made a little easier. More than likely the format of the 72300 is not used by other manufacturers of medical assessment handles. The 72300 is a non-standard format, it was not found in the International Electrotechnical Commission (IEC) or the American National Standards Institute (ANSI) specifications.

I scoured the internet for a replacement Li-Ion battery close in size but not bigger, since it has to fit into the handle. Many of the cylindrical Li-Ion batteries came close in length but not in width. Not only was I looking for the greatest capacity for a chosen size but one that wouldn’t produce 25 Amps if a short was accidentally made during handling. Here comes protected cells to the rescue. Protected cells are Li-Ion cells that have a control circuit attached to the end of the cell. The purpose of the circuit is to protect the cell against short circuits, over charging and over discharging.

The Panasonic NCR 18650B Lithium Ion battery was chosen for the most crucial component – the protection circuity (don’t want batteries catching fire or exploding in students or professor’s faces). The circuit limits the current to 4.875 Amps which is still a bit much for my liking but compared to the alternative there is no other option. The NCR18650 is rated at 3400 mAh, which is quite impressive for it’s size. The numerals in the part number 18650, refer to the width of 18mm and length 65.0mm. There is quite a difference in the size of the 72300 and the 18650. The 18650 is smaller by 4.3mm width-wise and 6.5mm length-wise. The most concerning of the 2 numbers being the width. The last thing I want is for the battery to be moving about inside the metal handle with the potential for a short to occur.

The spring inside the cap of the handle made it easy to overcome the difference in length and secure electrical contact. However, to keep the battery from moving side to side I purchase a 1″ x 2″ PVC Riser from Home Depot. The inside diameter matched the Panasonic NCR18650 perfectly. However with most mass produced products, outside of precision components, the outside diameter varied from perfect fit to snug to completely impossible. I needed a total 16 spacers, however half of them were slightly thicker than 1″, so I sanded them down with #80 grit sand paper. Each took about a half hour of hand sanding. 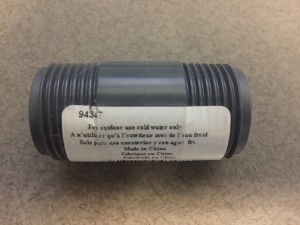 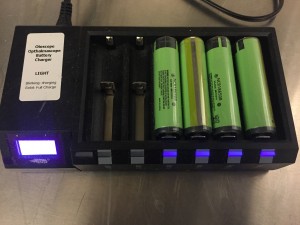 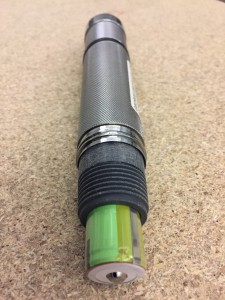 Battery inside PVC Riser inside handle